We're open 24/7 and ready to help you during COVID-19 with Sanitization Solutions.

Published by Allegra on October 28, 2021 in category: Uncategorized 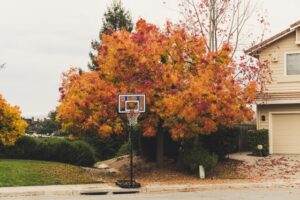 The drying leaves in fall and winter can be very pleasing to the eyes. However, they can be equally or more unpleasant to the sewage lines of your home.

If dried leaves and branches are not disposed of properly, they can pose a heightened risk of clogging the sewage pipelines and causing various structural and health issues.

What Happens to Unraked Leaves?

While fallen leaves in fall colors look beautiful in the yard and feel relaxing to step on, they are not the best form of decoration. Dead leaves and broken twigs can easily pile up throughout the colder months. The piled-up dead leaves and twigs not only look untidy and unkempt but can lead to several issues at your home.

Some people may deliberately try to dispose of fallen leaves and twigs down the drain. If you have ever done the same, you must know that it can block sewage lines.

Moreover, some others also like to play in piles of raked leaves. They rake their yards but leave the piles to play in it. Leaves and twigs can easily enter open sewage lines when someone jumps on them and sends them flying away.

Hence, fallen leaves and twigs should be regularly raked and collected in trash bags. If they are left in the yard, they can result in clogged sewage lines which can cause further damage. Here’s how:

How Can Clogged Sewage Lines Affect a Home?

Sewage pipes are narrow under a house. The size of these pipelines increases as they lead away from individual homes and buildings and get closer to the treatment plant. Under the ground, the sewage pipes from different plots are connected.

In simple words, it means that flushing down materials that are not supposed to be disposed of through sewage lines can cause issues at your home and your neighbors’.

Sewage lines are supposed to be replaced and maintained at regular intervals. Even if you have been properly maintaining your home’s sewage lines, your neighbors may not be doing it. This can be dangerous for two reasons:

Secondly, as the sewage pipes are connected underground, materials may get blocked a little further from your home. While you may think it may not cause a big problem for you, the opposite is more likely.

Blockage in one sewage pipe easily leads to blockage in other pipes. The phenomenon can spread in no time and affect all homes and or buildings in the surrounding area. Besides this, leaves fallen in roadside sewage holes also affect the ventilation in sewage pipes and lead to the same consequences. If the blockage reaches your home, it will result in the following:

What are the Health Risks of Clogged Sewage Line?

Cogged sewage lines not only adversely affect the function and quality of the plumbing fixtures at your home, but they can also bring several severe diseases to you and your family. Diarrhea, hepatitis, and gastroenteritis are some of the common diseases spread by overflowing sewage pipelines. If untreated, the toxic sewage material can also prove to be fatal.

Hence, it would be best if you kept your yard clean during the fall and winter seasons for your and your family’s safety. If the weather catches you off guard and you believe some dead leaves and twigs have entered sewage pipes, remove the sewage line blockage as soon as you can.